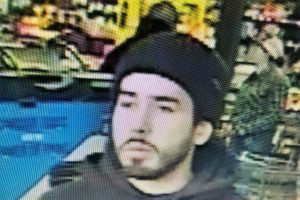 Sonora, CA – Sonora Police are requesting the public’s help to find a “person of interest” surrounding a felony vandalism at a local shopping center.

Sgt. Scott Mallon tells Clarke Broadcasting that the vandalism allegedly stems from an incident on Monday in the parking lot at the Crossroads Shopping Center on Sanguinetti Road in Sonora. The vandalism was reported by a motorist who after shopping found one of his vehicle’s doors had been keyed with the words “call the cops” scratched into it.

Mallon recounts that the driver fingered a man he had an altercation with while parking his vehicle. The victim reported that a pedestrian allegedly started yelling at the motorist claiming that he had almost hit him with his vehicle. Instead of engaging the angry man, the driver quickly rushed into a store.

Since the damage to the vehicle is over $450, it became felony vandalism advises Sgt. Mallon. The image of the suspect was taken from security cameras in the store.