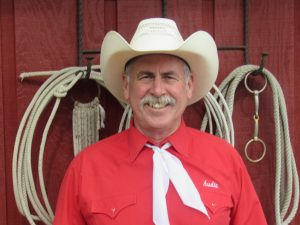 Update at 4:46 p.m.: While the COVID-19 crisis is preventing plans for this year’s Mother Lode Round-Up Parade and Rodeo, organizers say other activities may still be possible to pull off.

In an updated conversation with Clarke Broadcasting, General Chairman Audie Archer explains, at this point, it would be too late to hold the parade and other main events May 9-10 at the Mother Lode Fairgrounds even if the venue could reopen by then.

“There’s no way we can do that because there’s so much work involved and we start right after our Round-Up for the next year [and now] we don’t have any control, don’t know if it is going to be a month, two months,” Archer laments.

“There are other events we are going to still try to pull off if we can…maybe in July or August if it’s possible but our hands are tied right now,” he continues. The activities he is thinking of are the ones held at the Posse Grounds on Rawhide road like the Great Steak BBQ, the Rawhide Classic Team Roping and Barrel Race, which are generally held in mid-April ahead of the Round-Up; and the Queen Contest and Coronation, normally following in early May, also at the Posse Grounds.

“It’s a sad thing that in 63 years something like this has happened and we never dreamed anything like this would happen where we can’t put on the event for the community….and it’s hard on all of us because we all work so hard, the Posse, Posse wives, Queen contestants, the sponsors large and small, we thank them dearly for what they do.”
.
While Archer says it is too soon to guarantee being able to deliver all these events, three things are for certain, the 2020 and 2021 Round-Up Queens will receive extra honors moving forward; next year’s parade and rodeo will be even more of a celebration post-COVID-19; and the local community, as tight-knit and strong as it is will come out even better when the crisis is past.

Original Post at 1:47 p.m.: Sonora, CA – Although COVID-19 has put plans on hold for one of the Mother Lode’s most popular Western heritage tribute events, organizers say they have not canceled it yet.

Unsurprisingly, Mother Lode Round-Up General Chairman Audie Archer confirmed Monday morning with Clarke Broadcasting that the 63rd annual running of the weeklong event, parade and rodeo, is officially on hold due to the coronavirus crisis although organizers are still looking at possible rescheduling options.

As reported here, last week, Mother Lode Fairgrounds CEO Ken Alstott told Clarke Broadcasting that his office was following mandates handed down to state fairgrounds directing that no events take place between March 15 and May 15. Alstott added that if the order lifts, perhaps the Round-Up could still happen but that his staff was working with organizers of upcoming dates to either refund them or move their event to another date.

The state Department of Public Health issued new directives about what activities are — and aren’t — allowed during Governor Gavin Newsom’s stay-at-home order enacted and immediately went into effect last Thursday, as reported here, aimed to help slow the spread of the deadly virus.

While local governments may decide to put tighter restrictions in place, the state rules supersede any laxer orders issued by jurisdictions. To review some of the common questions and answers state officials laid out for the public, click here.

A Mother Lode tradition since 1958 presented by the Tuolumne County Sheriff’s Posse in partnership with many groups and businesses, the Round-Up was slated May 9-10. The event draws over 20,000 visitors and spectators annually and the kickoff parade has grown over the years to over 200 entries.