Newsom Issues Stay At Home Order Due To COVID-19 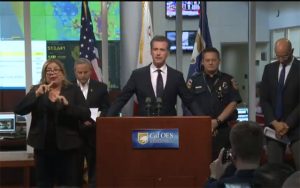 Sacramento, CA — During a press conference this evening Governor Gavin Newsom announced a new “Shelter in Place” Executive Order due to COVID-19.

It impacts the entire state of California. He says residents must “recognize the reality” of the situation. He noted that the order is similar to what has been in place for several days in the San Francisco Bay Area. Newsom noted that essential services will still operate, referencing places like grocery stores and medical services. He indicated that the order is not something that would necessarily be enforced by law enforcement, but rather through “social pressure” and self regulation. He stated that he hopes if people see large gatherings at places like parks they will be encouraged to stop meeting.

He said it is still ok for kids to go outside, people to walk their pets, and doing things where you are practicing social distancing.

He said the purpose of the order is to reduce the spread and “up the ante” of the state’s response. The move is designed to “bend” the current projections for cases. He couldn’t give a timeline for how long the stay at home order will last, but said he will be forthright in the next few days with updates. It takes effect immediately.

We’ll pass along more information about the order when it is released by the Governor’s Office.