McClintock And Kennedy Will Face Off In November 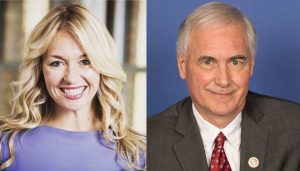 Sonora, CA — The candidates in the District Four Congressional race are reacting to yesterday’s election results.

The top-two vote-getters, regardless of party, face off in the November General Election. Republican incumbent Tom McClintock received 54-percent of the vote and Democratic Challenger Brynne Kennedy had 36-percent. Republican Julianne Benzel was a distant third with 4.2-percent.

McClintock has reacted, by stating, “I am deeply grateful to the people of California’s Gold Country and Sierra Nevada for their vote of confidence in yesterday’s primary election.  Once again, they have spoken clearly for individual liberty, constitutionally limited government and secure borders.  The voters of the Fourth District shine as a beacon of hope against the socialist policies that are destroying California and threatening our nation.  I couldn’t be prouder to stand with them and to stand with the President as we continue our work to restore America’s prosperity, security and greatness.”

Kennedy has put out a counter-statement, arguing, “November will be a choice between a successful business person who sets partisanship aside to put our community first, and a career politician who has repeatedly surrendered to the demands of party bosses and big moneyed, special interests. Our campaign is for everyone who has been left behind or ignored by Tom McClintock. It’s for Republicans, Democrats and Independents who share our belief that a Representative’s job is to work for everyone — not just the people who fund them. It’s about uniting our community, not dividing it. It’s for those who want more health care choices, lower-cost prescription drugs, practical solutions to the wildfire and home insurance crises, and tax reform that is fair to our district.”