The Walls Came Tumbling Down On Downtown Sonora Eye Sore 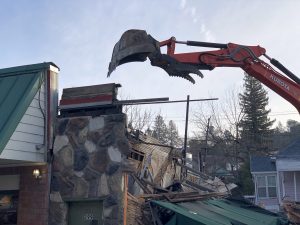 Demolition crews used two cranes to collapse the building sandwiched between the Downtown Diner and 76 Gas Station on the corner of Gold Street. Watching from across the street, Delilah Diaz, manager of the Gunn House Hotel remarked to Clarke Broadcasting, “They [the city] did it pretty quick. They just gave us a notice a few days ago and its already coming down. I’m surprised.”

Just last month, the city issued a notice and order to the owner of the building to expedite tearing down the building after a lawsuit that was holding up the demolition was resolved. The property owner is listed as Amarjit Singh.

Flames ripped through the Indian restaurant located at 301 South Washington Street in December of 2009 with fire investigators determining that faulty wiring in the second-floor apartment kitchen was to blame, as reported here. Then in March of 2013, the city ordered that floor to be removed to secure the building, as detailed here. Noting that it has been an eyesore for years, Diaz recounts, “Every time I walked by it, it looked like maybe transients were in an out of it. I don’t know, it just didn’t seem like it was there for any good purpose.” Click here to view the entire video interview.

Moyle Excavation was hired for the demolition, which began around 7 a.m. and by around 11 a.m. the building had been reduced to rubble. At 2 p.m., as shown in the image box pictures, most of the debris had been hauled away in trucks. Forman Lee Moyle shared,  “Crews faced no stumbling blocks during the demolition. The job went off without a hitch.” Crews will remain at the site until around 6 p.m. until the cleanup is complete. Until then a detour remains for the northbound lane of Washington Street/Highway 49 with motorists having to use Gold and Stewart streets to get around the worksite.

Click here to view our Washington Street webcam that overlooks the Bombay Restaurant to see how the work is progressing.