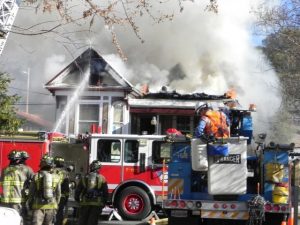 Sonora, CA — Two burned out buildings were issued demolition permits in Sonora. The home on Stewart Street began the process of being demolished yesterday.
City officials issued the permit for the Victorian Style home on the 400 block of Stewart Street between Restano and William Street. On January 17, 2012 flames destroyed the home, which was divided into 15 apartments.

The upper floor of the Burned out Bombay Restaurant also has a demolition permit and 108 days to be taken down. Building Official, Steve Fickel says, “A demolition permit has been issued for the upper floor of the Bombay Restaurant.” Located on South Washington Street the upper floor has structural and obvious roof damage. A date to begin the demolition is not known yet. The fire started in the second floor which was an apartment above the Indian restaurant. The cause of the fire was wiring in an interior kitchen wall. The building has been vacant since the fire in December 2009.