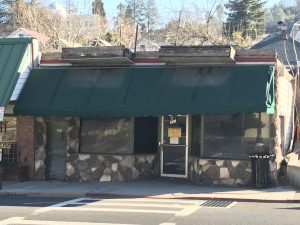 Sonora, CA — After a fire caused major damage in December of 2009, a former restaurant building at 301 South Washington Street will be demolished this weekend.

City of Sonora Community Development Director Rachelle Kellogg says the upper floor of the former Bombay Restaurant was removed a few years after the fire per an order from the city.

She adds, “The inspector ordered that done in order to secure the building. And recently the building has been more and more deteriorating. So, on January 21st the city issued a notice and order to the owner of the building to expedite getting the building down.”

The owner listed for the property is Amarjit Singh. There had been a delay in demolishing it due to a long ongoing lawsuit related to insurance issues regarding the building, but Kellogg indicates that the litigation has apparently now been resolved. Moyle Excavation has been hired to remove the building this Saturday, February 15, between 6am-6pm. The northbound lane on Washington Street will be closed between Church and Gold streets. A detour will be in place for traffic. It is unclear at this time what the future holds for the property.

The fire occurred on December 15 of 2009 and Sonora Fire Department investigators determined that the cause was an electrical malfunction in the space connecting the kitchen and dining areas.

Click here to view our Washington Street webcam that overlooks the Bombay Restaurant.