Santa’s Express Comes Through For Calaveras 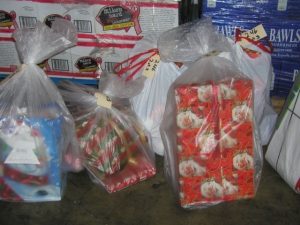 San Andreas, CA – In its annual pre-Christmas run, Santa’s Express delivered big for local residents who otherwise may have spent the season with few or no holiday trimmings.

This week, 1,147 Calaveras County families who registered for Santa’s Express received festive foods, including turkey, ham, groceries, fresh produce, and desserts to enjoy over the holidays, and 743 children got Christmas toys, according to Resource Connection Food Bank Director Jeannie Hayward.

According to Hayward, the Rotary Club and other groups adopted 258 of the families, which further stretched Resource Connection’s budget of over $30,000, raised this season through the annual Santa Express Dinner Dance on Nov. 1 and from seasonal donations. The Rotary additionally delivered holiday cheer in the form of 200 food baskets last weekend to seniors and home-bound residents.

Hayward says that this year’s tally of Santa Express households is nearly the same as last year’s, which is down slightly from the 2012 figure of 1,300.

There is still “a tremendous need” to combat local hunger, Hayward states. “I think that we’re probably the last areas…the rural areas are the generally the last to recover when there is an economic downturn.” She adds, “We’re dealing with many families that still having a hard time finding jobs. Many of them are underemployed, where a few years ago they might have been working full-time…so there are still quite a few families that are struggling here in the community.”

Come January, after the generosity of the holiday season, Hayward states, “we kind of start all over again with families coming through and we could use volunteers at the food bank every single day. We’re open Monday through Friday and we do have volunteer orientation every Monday…that helps us tremendously, especially in the warehouse where we distribute…and…have to bag the food.”

Those interested in helping the Resource Connection in the New Year should call the office at (209) 754-1257. All support is appreciated, says Hayward. “Obviously any kind of food donation, any kind of monetary donation, as I said, it’s not just during the holidays that we need help. We really do need help all year long.”