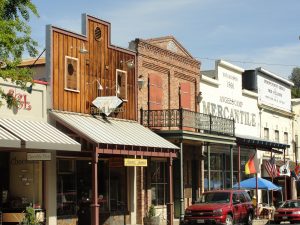 Angels Camp, CA – In tandem with the buzzing sounds of new businesses in downtown Angels Camp, data-mining efforts on behalf of the city and Destination Angels Camp (DAC) are now busily focusing on attracting even more commerce to the city.

Since late November, Anne Forrest, the president and CEO of Destination Angels Camp says the data-gathering efforts have been underway with help from Buxton, a Ft. Worth, Texas-based company that helps destinations, restaurants and retailers use customer analysis to grow business. It counts, among its California clients, the cities of Palm Springs and Pasadena. Buxton Public Sector Division Vice President Lisa McCay says the company will be providing Angels City with all the necessary analytical insights for an effective tourism and retail development program.

Selected last year as the partner for the project, Buxton will update and add a tourist spending component to a 2010 research study from a previous grant, Forrest says. Funded through a community block grant of just over $100,000 to the city and DAC, the research findings from the company are due for presentation to the city by the end of March. Following that, the information may be shared with the public, according to Forrest.

“This area, certainly Angels Camp, because of its concentration of hotels and restaurants, has a large population of tourism each year,” Forrest states. “Tourism…being both those that are one-day or one-week trippers, to people who have second homes here, who really are considered tourists when they are here. And to know, specifically, how much money is coming into the community each year from tourists and second home owners here will be really important.”

A Million+ In Buying Power

Forrest elaborates further: “We have a small population…and you add another, what they say might be a million to a million and a half people who pass through this area every year — and you have THAT buying power – and you have something to talk about.”

Through the partnership, the city will tap the company’s proprietary web-based real estate platform, called SCOUT. As Forrest explains, “It is going to be very useful…it takes all the research information across psychographics and demographics…as well as what people are spending their money on in Angels Camp and surrounding area.” For example, businesses will be able to see what they are currently selling, what people are spending — and buying outside of Angels Camp and the county. That, Forrest points out, will provide current retailers with value data regarding potential items that they might consider stocking. She adds, “From Destination Angels Camp’s point-of-view, we’ll be able to take the research and go out to retailers that we are trying to attract to the area and say that there is a need for the product…and a market…for what people can’t buy in Angels Camp right now.”

According to Forest, recently open Market49 (1267 South Main St.), in the Emporium building, brings together a café bistro/ espresso bar and a cheese and chocolate shop. Forrest says that she expects the long-awaited downtown Utica Hotel sale to close by the end of March or early next quarter, shortly after which renovations are expected to begin.

Slated for an opening, sometime in May is Sugar, an artisan bakery by Christine Abusaidi, a popular local wholesale baker. According to Forrest, earlier this week, Abusaidi successfully concluded what may be the area’s first Kickstarter business fundraising campaign to fund the final $12,000 she needed to complete building her kitchen.