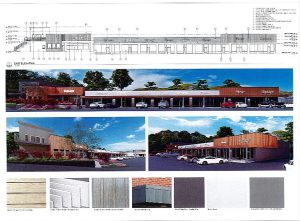 Sonora, CA — The Sonora Planning Commission will review a proposal to make improvements to the exterior of some of the existing buildings in the Sonora Plaza shopping center on Mono Way.

The project calls for adding fiber cement board with a cedar like texture in some areas, repainting the exterior, replacing the metal roof on the southeast facade and slightly increasing the height on the northern end. The area is located between 708 and 736 Mono Way. It will be patterned after improvements approved by the commission in October of last year for the nearby 99-Cent store, future Wilco site and the former Cost-U-Less building.

The Sonora Planning Commission will vote whether to issue a design review permit at a meeting coming up on Monday, February 10 at 5:30pm at City Hall.

The only other item on the agenda is a presentation by the Tuolumne County Transportation Council regarding Senate Bill 743 regarding CEQA reform and a Vehicle Miles Traveled study.