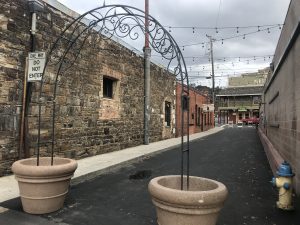 Sonora, CA — The Sonora City Council closed Linoberg Street for a one-year trial period which is set to expire in March.

However, since there were some delays installing portable streetscape items, the council will vote tonight whether to extend the trial period to February of 2021.

It is specifically between Washington and Stewart streets. The Vision Sonora Committee has helped install large pots with a trellis, lights, benches and other amenities. The next big step is for a mural to be created along the side wall of the Diamondback Grill building.

Anyone wanting to use the street for an event can seek approval through the city’s Special Event Application process.

Also tonight the city council will discuss a proposal to have Mayor Jim Garaventa sign a letter on behalf of the city calling for PG&E to restructure its investor-led utility into a customer-owned operation. The request to the city was made by San Jose Mayor Sam Liccardo, who has gained the signatures of over 50 other California elected officials. The letter will be submitted to the California Public Utilities Commission.

In addition, the council will introduce a new Police Officer to the staff, Mathew Bowen. Today’s meeting starts at 5pm at Sonora City Hall.