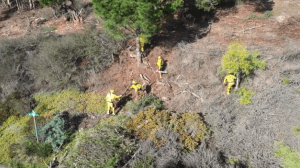 Governor Gavin Newsom is referring to CAL Fire’s recently provided 45-day Community Wildfire Prevention & Mitigation Report and listed projects to his office in response to an executive order last March to identify areas, then plan and complete fuels reduction and wildfire risk mitigation projects to “put the state on a path toward long-term wildfire prevention and forest health.”

The impetus for Newsom’s urgent action came in the aftermath of the Camp Fire, the Woolsey Fire, and the Carr Fire, among the most destructive and deadliest wildfires in state history. It set CAL Fire, National Guard, and California Conservation Corps crews working together at an emergency pace to complete what are typically multi-year projects in less than one year.

“California isn’t just waiting around for next fire season. We are acting quickly – with emergency pace – to protect communities most at risk and save lives before the wildfire starts,” Newsom states. “The unprecedented scale of the crisis requires an unprecedented response. These projects are part of California’s all-of-the-above, all-hands-on-deck approach to preventing and fighting wildfires.”

Of the listed projects, two are in Mariposa County. The Grist Fuel Break, south of Highway 49 near Bootjack, removed brush and pruned and trimmed trees across 102 acres to improve upon an existing fire road. The effort involved CAL Fire, Bureau of Land Management (BLM) personnel and local property owners with the goal of protecting the communities of Bootjack (population: 969), Mariposa (population: 2,173), and Midpines (population: 1,204).

The 44-acres Metcalf Gap Fuel Break in Mariposa County near the Madera County line in the vicinity of Nelson Cove and Miami Mountain is a road maintenance and fuel reduction project. The project connects a new fuel break to the Watt and Stumpfield road fuel breaks in the Chowchilla River Canyon and is expected to help protect multiple communities in Madera and Mariposa counties. CAL Fire treated a critical access road into the Chowchilla River Canyon while developing a continuous fuel break. Among the communities and habitats, it was designed to protect is Ahwahnee (population: 2,246), Nipinnawasee (population: 475), Ponderosa Basin (402 Homes), and Lush Meadows.

The largest project in Madera County, the 4,621-acre Highway 41 Management Plan between Hildreth and Little Table Mountain, involves burning annual grasses along Highway 41 in the eastern part of the county, which has an unfortunate history of the most wildland fire starts in the area. The project burn targeted improving rangeland while reducing highway hazards and high fire suppression costs. It protects Coarsegold (population: 1,840), O’neals (population: 172), Hidden lakes (208 homes).

In the Bald Mountain area of Madera County, the Beal and Musick fuel breaks are located just south of Shaver Lake the Rush Creek and Blue Rush fuel breaks. A 728-acre fuel break, the Beal break has been a combined project with the USFS. The break has effectively stopped the forward progress of four wildland fires and maintenance of it directly reduces the impacts of fire for the residents living on Beal Fire road and the communities of Meadow Lakes and Alder Heights that are directly above the break. The areas were impacted by over 80 percent of tree mortality in recent years.

The Musick Fuel Break, a new 393-acre roadside treatment, was undertaken to create a safe evacuation corridor for residents and provide access to a high-risk area for wildland fire for both CAL Fire and the USFS in the Jose Basin area. The scope was to remove brush, dead hazard trees, and thin understory. It is noted that the main transmission lines for the Big Creek Hydro Electric Facility transect the area. Besides Meadow Lakes, Alder Heights and Shaver Lake this break also protects Pine Ridge.