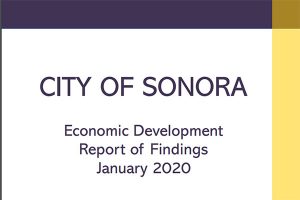 Sonora, CA – City officials are asking for the public’s input on priority areas for economic development over the next two years.

The City of Sonora has already done its own fact-finding as it hired Chabin Concepts, a Chico-based economic development consulting firm with experience in small communities to conduct a review of its current economic situation. Their report is in and identifies four key areas to focus on with respect to economic development activities. Those include downtown revitalization, filling vacant buildings, recruiting new residents, and growing industry sectors (as shown in the graphic below). City officials detail that each has several activities and implementation tasks, both short-term and long-term.

Some of the main highlights in the report with implications from an economic development standpoint over the past five years are provided below:

The full reports can be found here. However, before acting on any of the “next steps” outlined in the report, the City wants to hear from its residents and businesses. To oblige, all citizens have to do is take a short online survey, click here. The survey will be available until Friday, February 7. Then on Feb. 18 at the city council meeting consultants from the firm will give a presentation on the report and its results.