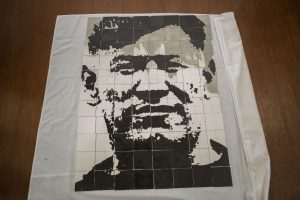 As reported here, the movie highlights Thorpe’s life and career. A member of the Sac and Fox Nation, he became the first Native American to win a gold medal for the United States. Considered one of the greatest, most versatile athletes of modern sports, he also played major league baseball, basketball, pro football and was president of the organization that became the National Football League (NFL).

Among the VIPs in attendance at the event was Billy Mills, 1964 Olympic gold medalist and member of the Oglala Sioux Tribe, and Martin Sensmeier, who is starring and serving as executive producer for the upcoming biopic entitled “Bright Path: The Jim Thorpe Story.” Renowned Kiowa-Choctaw artist Steven Paul Judd, who was also there, invited tribal members to create tiles for a collage depicting a portrait of Thorpe.

“By honoring our ancestors and telling our story, we strengthen our communities and prepare our youth for tomorrow,” comments Tuolumne Chairman Kevin Day. “It is very important to tell and see the stories of Indian Country, our history and education of our culture. Jim Thorpe was an American icon and world-renowned athlete who was also a Native American during a difficult time in our history. We are very excited and proud to be a part of telling this crucial story.”

Sensmeier, who plays Thorpe, is an Alaska native of Tlingit, Koyukon-Athabascan descent. His credits include “The Magnificent Seven” (2016), HBO’s “Westworld,” and the Paramount Network’s “Yellowstone” series.