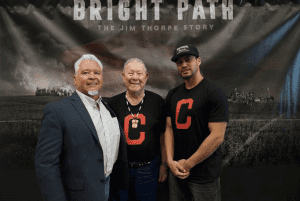 Tuolumne, CA — Me-Wuk Tribal Chairman Kevin Day shares with a lead actor cast and Angelina Jolie onboard among the producers, a feature film the tribe is backing will help bring the true story of legendary Native American athlete Jim Thorpe to movie audiences in the coming months.

Day, who also chairs the Central California Tribal Chairpersons’ Association of 61 tribes, recounts that it was back in 2015 that the group first learned of the project being promoted by Pictureworks Entertainment. As reported here, after doing some months of due diligence, the Tuolumne Band of We-Wuk Indians announced that it would be among the financial backers of the film titled Bright Path The Jim Thorpe Story.

“We decided to invest in the venture — we liked the story and we were the first tribe in the U.S. to invest to make sure the story was told properly,” Day confides. He admits feeling very humbled when some other tribes after doing their own due diligence, followed suit. “It made me kind of proud that they saw Tuolumne investing in it…believing in it…it made us pretty proud that we were solid enough to do this and they had their faith in us,” he recalls.

Speaking in more detail with Clarke Broadcasting about recent developments, Day says that planned shooting locations include Canada and Carlisle, Pennsylvania, where Thorpe attended school ahead of emerging as an international figure by winning Gold Medals in the 1912 Olympics for the pentathlon and decathlon. Thorpe famously went on to play Major league Baseball and pro football and served as president of the organization that became the National Football League.

“It really means a lot to have a Native American athlete of that caliber, and what he did it was just amazing and something to be proud of, a hero,” Day emphasizes. He adds, “There were not a lot of young Indian children back in my day that did not know about or look up to Jim Thorpe — I did — and wanted to be Jim Thorpe or just like him.”

As for Jolie’s involvement, Day says, “She bought into the story…just like us and Jim Thorpe’s family, we believed in these guys that the truth was going to be told about the [life] story.” Asked if the tribe has met with her yet he says a meet and greet is planned in a few weeks. Day adds that excitement continues to build over the project with the casting of actor Martin Sensmier, who starred in the 2016 The Magnificent Seven reboot and is an Alaskan Native.

In the months ahead, due to the tribe’s involvement, Day says that possible developments might include some of the tribal members having the opportunity to be cast as extras. “We will see what the needs are and if any of the tribal members fit some of the categories they are looking for.” he explains, adding that the producers have also indicated if there are any good fits they are open to doing some potential shooting in Tuolumne County.

Asked if the movie industry was a possible new investment channel for the tribe, Day chuckles. “It is probably something we are not going to get in the habit of doing. It just kind of glided into our lap and we think it was something worthwhile — and through the eyes of a Native American we think the story should be told.”

Illuminating further, he adds, “You know, we have met with Jim Thorpe’s son Bill and some of their family members and they were supportive of it because it was going to be truthful and that is really one of the main reasons…without their consent I am not sure that we would have done it.”

Giving enormous credit to Pictureworks, Day comments, “The group we are working with are tough…smart and they know what they are doing…they are really good about listening to us and the other tribes and Jim Thorpe’s family.” While the movie will ultimately be ready when it is ready without putting himself too far out on a limb, he happily confides, “I would venture to say that it will be less than two years.”