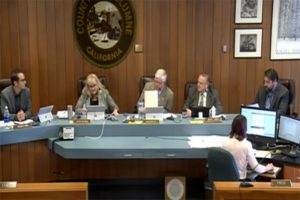 Tuolumne County Board of Supervisors

Sonora, CA — Supporters of the cannabis industry in Tuolumne County packed into the board of supervisors meeting this morning during the public comment period.

The City of Sonora, a separate jurisdiction, has a program in place that allows for the permitting of medical cannabis dispensaries, but Tuolumne County, in its unincorporated areas (outside Sonora), does not allow the commercial sale or cultivation of marijuana. It is an issue that the board of supervisors has declined to address over recent months. Jeff Muzio, who operates Hazy Bulldog Farms on Mono Way, in the city limits, has been a regular at the supervisor meetings, often urging the board to take some form of action on cannabis, so that he can potentially expand his business into other areas.

Today, around 20 people came up and spoke about the benefits of cannabis, in support of Hazy Bulldog Farms, citing the drugs ability to help patients with things like seizures, anxiety and depression. They also touted the business as a “good community partner.”

Muzio is required to pay the city of Sonora a “public benefit fee” of no less than $10,000, or 5-percent of his gross receipts, on a monthly basis, to operate on Mono Way.

District Five Board of Supervisor candidate Jaron Brandon was one of speakers, who stated, “I can’t think of another business that can pay 10,000 dollars a month up front, just to be able to operate in Tuolumne County. I feel that we could have an industry, especially I think for District Five, that brings jobs, that brings prosperity, that brings another export here, and makes our economy more resilient.”

Brandon acknowledged that there are issues to mitigate but urged the board to go about it with an attitude towards bringing new jobs and business.

Hazy Bulldog Farms owner Muzio noted, “What we have witnessed today is the evolution of the cannabis conversation…The majority of the people have voted on this, and the majority of people want it, and we’ve come in here today with an educated argument.”

Muzio acknowledged that cannabis is a complex issue and pledged to work with the board regarding the challenges that arise.

District Three Supervisor Anaiah Kirk joined the public comment line at the end and was the final speaker. He thanked those for coming today and stressed that the use of marijuana is allowed anywhere in California (Tuolumne County just bans its sale and commercial cultivation).

Kirk added, “To Jaron, If you do the research, it is actually that for one dollar that you make in revenue, you are going to spend about $10 fixing the problems that come with it. This is a slow-moving issue. If you look at Colorado and other states, they are starting to backtrack because of the statistics that are coming out are not all what they were cracked up to be. This is not something as a board member that I will move fast on.”

The public comment period typically goes about 15 minutes, but today it lasted for about 45 minutes. The speakers were given a three-minute time limit. The supervisors take no action in response to the public comment items.