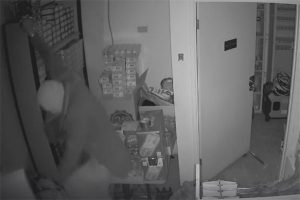 Security video from the business showing the burglary

Sonora, CA – DNA results may be exactly what police need to catch an accomplice to a burglary in December.

Last week police released details of the arrested of one of the suspected burglars, 40-year-old Storm S. Corral, a Sonora transient. Police say he allegedly cut a hole in the ceiling of a Sonora business on Mono Way from the vacant space above to gain access, as reported here.

The video in the image provided by police shows Corral caught on surveillance video exiting the business.  Regarding a possible accomplice, Chief Turu VanderWiel updates, “We have a person of interest that we would like to find and interview. We don’t have anything solid yet.”

Chief VanderWiel added that they are not ready to reveal that person’s identity stating, “We don’t believe he’s a danger to the community. Even though he’s clearly capable of larcenies but no indication he’s a danger.”

The Chief shares they are awaiting on other evidence that could finger the accomplice, “We do hope that DNA evidence may help us find that accomplice as well.”

Chief VanderWiel would not reveal specifics on that evidence except to say it is items collected at the burglary scene. He advises that it could take several weeks to months before they get the results, asking again that anyone who may have information related to the incident to call police at 209-532-8141.