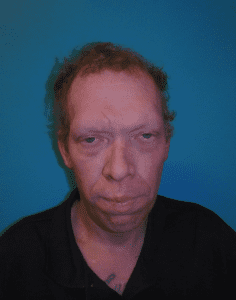 Sonora, CA – Police linked a man-size hole cut into a local business’s ceiling to a suspect with a history of burglaries and thefts and are now seeking his accomplice.

Sonora Police Chief Turu VanderWiel shares on Monday officers arrested 40-year-old Storm S. Corral, a Sonora transient, at the Probation Department. He faces charges of burglary and conspiracy to commit a crime in connection with the break-in, which occurred Dec. 22.

The chief recounts just after 6 o’clock that morning, his office received a call for a burglary alarm sounding at a business in the 700 block of Mono Way. While arriving officers found no signs of forced entry from the building’s exterior, they discovered the makeshift ceiling manhole during their search of the premises.

“It led into a vacant building upstairs where forced entry was made through a rear door,” the chief says, further sharing officers determined that the burglary occurred within two hours of the alarm sounding. Once armed with surveillance evidence and tips from engaged members of the community, he adds, the investigating officer eventually identified Corral as the suspect.

Monday the investigating officer located Corral, who subsequently confessed to the crime. At his booking into Tuolumne County Jail, he was assigned a $50,000 bail but since he was on post-release community supervision the Probation Department placed a hold on him.

Chief VanderWiel says the case remains under investigation. “The Police Department knows that Corral had an accomplice while committing this crime and we are working to identify that person. If anyone has information that may be useful to this investigation, please call the Sonora Police Department at 209-532-8141.”