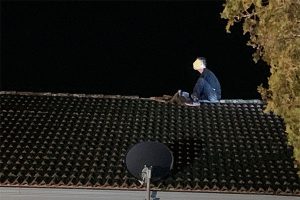 Suspect on the roof during standoff

26-year-old Nicolas Gallegos is being held on a $95,000 bail related to several felony deadly weapon assault charges. Those stem from the suspect at around 8 p.m. climbing onto the roof of a home in the 200 block of Market Street, west of Highway 49, and hurling ceramic tiles at the deputies below, as can be viewed in image box photos.

Spotlights were brought in to shine on the house so deputies could clearly see the suspect. While being ordered to come down several times, Sheriff’s spokesperson Sgt. Greg Stark recounts, “The suspect stated he had a gun and was going to use it to harm the deputies. The suspect also made gestures mimicking a handgun and stated he was only coming down if deputies use lethal force.”

That is when the sheriff’s hostage negotiation team was called in to talk Gallegos into giving himself up, which he did by climbing down a ladder and surrendering to deputies around 11:30 p.m.

Gallegos faces several felony deadly weapon assault charges.  No firearm was found on him and no motive was given. Sgt. Stark adds this is an ongoing investigation and no additional information is being released.