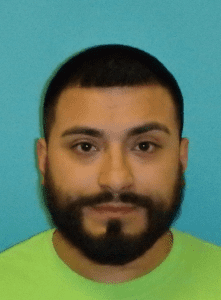 Sonora, CA – Police were able to find and jail a man who left the scene of an alleged assault at a downtown bar.

Sonora Police Chief Turu VanderWiel recounts the incident, which happened Saturday night just after 10 o’clock outside The Office Bar on South Washington Street, involving a male victim and the suspect.

“We received a call about a man who was assaulted and was bleeding from the head,” the chief reports. “Investigating officers determined that 24-year-old Paul M. Hernandez of San Juan Texas punched the male victim hard enough to knock him into the brick wall where he received a significant injury to his head…also sustained a broken ankle in the fall.”

According to VanderWiel, officers later located Hernandez at a nearby motel, listed on the custody report as Heritage Inn, and arrested him for felony battery with serious bodily injury. He was booked in Tuolumne County Jail with a bail of $50,000.