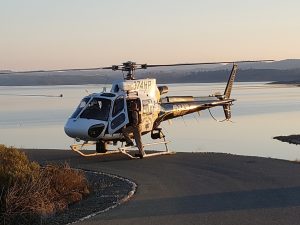 San Andreas, CA – A family day at the lake became a huge cause for concern when two went missing.

According to Calaveras County Sheriff’s spokesperson Sgt. Greg Stark, on Saturday, shortly before 3 p.m., deputies were alerted to a report of two female juveniles, ages 10 and 12, who became separated from their parents in the Lake Hogan area. The pair had left for a short walk around noon and were two hours overdue.

As Stark recounts, “The parents became concerned…deputies arrived and began checking the area with the assistance of the Hogan Rangers and local fire engines…the CHP helicopter was contacted to assist…and located the two females approximately two miles from where they started their walk.”

Among other responders was the Sheriff’s Volunteer Search and Rescue Team, according to Stark, who adds that the girls, who were found uninjured and without need for medical assistance, were picked up by the helicopter team and flown back to their parents at Wrinkle Cove.

He points out that being two hours late during an afternoon in the wintertime brings additional concerns when dark is coming and those who are unaccounted for are not well-equipped for extended exposure to outside weather conditions. Calling for emergency assistance earlier than later makes search efforts somewhat easier not only for the sake of visibility but also because those missing if they remain on the move will have covered less ground.

Stark recommends for those planning on taking a stroll to stop walking and make yourself visible if you lose orientation. “Always tell people where you are going and have a definite area where you are going and when you are returning,” he advises. “In this situation, the females appeared to keep walking, which put more distance between them and where they were found near the shoreline on a bike trail.”

Among other tips he offers for walkers and hikers: do not go alone; always have backup supplies in the event you get lost and it takes an extended time for searchers to find you.