Behind The Scenes At The New $8 Million Dalton Medical Offices 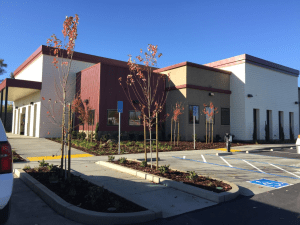 Angels Camp, CA – Another multi-million-dollar rural health care center coming to Calaveras is ramping up for a mid-January opening.

Clarke Broadcasting was able to get in for a recent private visit at the James Dalton Medical Offices of the Dignity Health Mark Twain Medical Center in Angels Camp, located at 590 Stanislaus Street off Highway 49/Main Street (above Froggy’s Car Wash). We also talked with key officials, including Dignity Health MTMC President/CEO Doug Archer, who helped lead the tour.

Archer projects that over time the hospital and district will be able to help bring patient costs down and that more folks will opt to be treated locally instead of heading to the Central Valley.

“Money will be spent to deliver services instead of competing,” he maintains. “If you consider community resources — not Dignity, not the District [as separate], you are using resources more effectively. Dr. Randy Smart [MTHCD president/CEO] and I are really focused and meet a lot…so there is no more competition between us to take care of the county.”

Not that there isn’t room for competition, he readily acknowledges. “Dignity and Adventist [Health] are competitors. It is like Coke and Pepsi — it’s just the way it works. But there’s no reason for Dignity and the District to compete.”
Archer indicates that the tentative opening date for the Dalton facility is Jan. 20 and that a grand opening with a ribbon-cutting is slated for Feb. 19.

Originally budgeted around $7.2 million, the final costs are winding up around $8 million, mostly due to the 15 or so feet of rock located across the entire building site that had to be blasted out and removed. Despite having to deal with all the rock and 47 days of delays due to 2018 rain events, next month’s opening date is only about three months besides initial projections.

The Dalton offices, which will focus on providing expanded primary and orthopedic care, features 16 exam rooms, a medications/injections room, and a procedure room for minor treatments also equipped with a crash cart. There is dedicated space for telepsychiatry visits with an offsite specialist in tandem with an assigned nurse as well as appointments with local behavioral health care staff.

According to Clinic Operations Director Marina Bowlin, in addition to relocating the existing doctors and staff from the current clinic location at Angels Towne Center to the Dalton offices, there will be at least two more primary care providers at the facility.

Incorporated into the facility’s design is a large multi-purpose room with a separate exterior entrance that can be locked off from the medical areas that will provide community event or conference space as well as serve as a staff break room.

Archer explains, “The Mark Twain Medical Center Foundation raised $2.4 million of the [Dalton center’s] total cost, so about a third of it. Generally, philanthropy group targets are five or ten percent…so that is pretty awesome — and the donors wanted to have a room that can be used for community purposes.”

Nicki Stevens, Dignity MTMC’s manager of marketing and business development, notes that it was the vision of the facility’s namesake, James “Jim” Dalton in conjunction with the foundation’s other board members at the time, for the facility to create positive community impacts and especially support the underserved.

Facility Director Ed Gonzales adds that the Dalton offices have a built-in backup generator that will effectively maintain the building, its assets, and medical supplies in the event of a power outage or shutdown. He is also proud to point out sound-muting devices on the exam room doors that enable patient-health care staff discussions to remain private.

To read about other Dignity Health MTMC plans relating to local facilities improvements, including a new clinic space at Copper Valley Town Square in Copperopolis, now tentatively slated for next June, click here.

To view recent photos of the new facility, click into the image box slideshow.