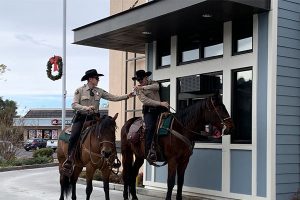 Sonora, CA — Shoppers were surprised to see deputies on horseback ordering coffee from the Starbuck’s drive-thru at the Junction Shopping Center on Mono Way in Sonora.

The deputies with their horses pictured in the image box are members of the Tuolumne County Sheriff’s Mounted Unit. There are seven teams in total that include one horse and rider, comprised of patrol and jail deputies.

“The main purpose of the unit is for crowd control but its also used in ceremonies and at the discretion of the Sheriff on an as-needed basis,” relays sheriff’s spokesperson Officer Niccoli Sandelin.

With a sheriff’s community service unit office already stationed at the shopping center, the teams will patrol the parking lot one to two days a week for the month of December. Sandelin says the teams will be looking for grinches, sharing, “People are always fearful of packages being stolen from vehicles during the holidays and it just shows everybody we’re here and keeping an eye on things.”

The mounted units will be utilized year-round and serve many benefits as Sandelin details that they create an enhanced vantage point to see larger areas or crowds, provide an easier way to maneuver through crowds and increase patrol efficiency while decreasing the number of deputies needed. Another advantage, it provides an alternative form of transportation, as Sandelin explains, “A horse can ride on the street through trails and brush. You name it and they can probably ride in it. So, it gives us the versatility to able to ride on different terrains.”

The horses must pass a rigorous training program just like the K-9 units before they can interact with the public. Jail deputies are only allowed to patrol during a ceremony, like a parade, or an emergency. Sandelin specifies that only the sworn patrol deputies can work at the shopping center, which includes three teams with riders: Sgt. Jeff Wilson, Deputy Cody Stephens, and Corporal Chris Lockhart.

The horses are owned by the deputies and all the associated expenses are paid by them, so no tax dollars are used. The county just pays the deputies regular wages. To help with the costs, Sandelin says the department plans on holding fundraisers in the future.