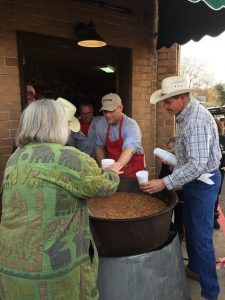 Sonora, CA – The time-honored tradition of waiting in line for a bowl of hot beans continues this year with the Tuolumne County Sportsmen stirring the pot for a second year.

This will be the 32nd year for the Mutz´ Bean Feed, which takes place on the third Friday of December (this year December 20) every year in Sonora. The ritual was in jeopardy when it’s creator, 90-year-old Galen “Mutz” Mutzner, announced he was calling it quits two years ago. That is when the Sportsman group was handed the ladle to continue the popular Christmas holiday event and Mutzner took up the task of bell ringer instead of cook, as reported here. President of the Tuolumne County Sportsmen, Jim Phelan, hopes to continue that tradition as well.

“Hopefully he’s going to ring the bell again this year. It depends on how good he’s feeling. The invitation has been offered to him.”

Looking back on last year where they had to learn on the fly, this year Phelan expects, “It’s going to be an easier process. It was definitely a learning experience last year going through the different red tape that we had to go through the permits and etcetera. So, this year should be much easier.”

Rain or shine the steaming beans will be dished up on the corner of South Washington and Linoberg streets. With the bell to come and get it, ringing at noon.