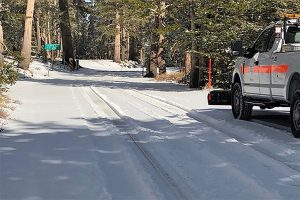 Update at 7:16 a.m.:  Yosemite National Park officials have confirmed to Clarke Broadcasting that Highway 120 Tioga Pass will remain closed at Crane Flat through the weekend. The highway was shut down on Tuesday as a winter storm blew through the region. As reported below the two other Mountain Passes, Highway 108 Sonora Pass and Highway 4 Ebbetts pass reopened to travelers on Friday afternoon.

Original post at 3:30 p.m.: Sonora, CA — The gates have swung open for two of the Mountain Passes, but one remains closed.

This afternoon both Highway 108 Sonora Pass and Highway 4 Ebbetts Pass have reopened to traffic. All the passes shut down temporarily in anticipation of a winter storm on Tuesday, as reported here. Caltrans spokesperson Rick Estrada updates that the snowfall ranged from 4 inches to nearly a foot in higher elevations, but the damage was light. He adds, “There was nothing that wasn’t relatively easy to manage and get off the roadways. There wasn’t a lot of debris because this wasn’t one of those wicked winter storms. So, our crews were able to get through the two passes in pretty quick order and get things off the roads.”

Currently, Highway 120 Tioga Pass remains closed due to snow and icy conditions. Yosemite officials have not yet given an update on whether it will reopen for the weekend.

Caltrans is watching an impending winter storm where the National Weather Service is calling for heavy mountain snow beginning Wednesday, November 27th of the Thanksgiving Holiday, which could close the passes again. In terms of travel, Estrada notes, “What we usually try to do is close them [the passes] early because we don’t want people getting trapped on that side of the gate when bad weather is coming through.”

Caltrans plans to have an update at the beginning of next week to give travelers a heads up regarding whether they will need to change their holiday travel plans.