Strong Sonora Victory In Second Round Of Playoffs 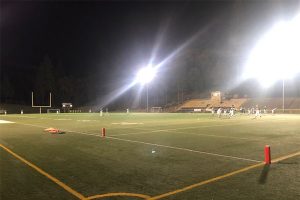 The opening quarter had Sonora kicking off to the Grizzlies who, after a big return into Cats territory, took their first possession down the field and Quarterback Ayden Nordby capped the drive with a 1 yard run for the score and with the extra point Golden Sierra High was up 7-0 early.  Sonora would answer back when Hunter Brewer would scamper 35 yards and with the try good, it was all tied 7-7 at the end of the first quarter.

To open the second quarter Sonora Quarterback Nick Crockett would fake a handoff and keep the ball, dodge defenders, and score on a 25-yard run. The Cats would tack on the extra point to take the lead 14-7. Nordby for the Grizzlies would score from 35 yards out but the point after would be blocked by the Cats, maintaining a 13-14 Sonora lead.  At the end of the first half, the clock appeared to run out on a Wildcat drive, but Sonora was able to call a time out with two seconds left. On the final play of the first half, Crockett hooked up with Brewer on a 32-yard pass to the back corner and Brewer was able to make the catch and keep his toes in bounds for a touchdown as time expired. The extra point would give the Wildcats a 21-13 halftime lead.

Sonora would receive the kickoff and take the ball down the field capped off by Elijah MacDonald scoring from 3 yards out, the kick would split the uprights and the Cats would lead 28-13. The Wildcats would kick off and knock the ball out of the hands of the Grizzlies player and recover the loose ball. The Cats again drove down the field and MacDonald would find the end zone again, this time from a yard out and the extra point would extend Sonora lead 35-13. Golden Sierra would use a trick play, the hook and lateral, on this ensuing possession and scored from 65 yards out. The two-point conversion would fail, and the Grizzlies cut the Cats lead 19-35. Sonora’s Hunter Foust would convert the Grizzlies’ turnover to 6 points on an 8-yard run and the extra point putting the Cats up 42-13. Sonora would score one more time when Joshua Fernandez went untouched from 1 yard out and the extra point would end the third-quarter scoring with Sonora leading 49-19.

The fourth quarter would have the Wildcats adding one more score when Foust secured his second touchdown on a 13-yard pass and with the point after the score would be 56-13, which would be the final.

With a Wildcat win, they move forward to the CIF Sac Joaquin Section Division VI semifinals next Friday. The game will be broadcast live on Star 92.7 and live-streamed at Mymotherlode.com. Sonora will travel to Escalon to face the Cougars who beat Hughson 21-6 last night.