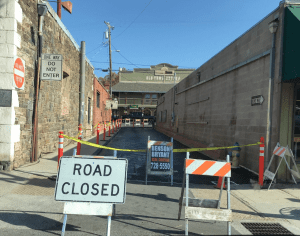 Sonora, CA – A transformation underway will convert a short stretch of a historic downtown street into a temporary pedestrian park.

This week the part of Linoberg Street situated between Washington and Stewart streets was officially closed off to traffic as construction work began in response to Sonora City Council’s authorization earlier this month.

The council directed acting City Administrator Rachelle Kellogg to execute a formal agreement with Neil Goodhue, who owns buildings along the section at 87 and 93 South Washington Street, who agreed with placement plans of design elements such as murals, string-lights, and a solar panel.

The idea for a permanent pedestrian park on Linoberg Street, an area that the city has agreed to special event closures for many times over the years, was formally endorsed back in March of 2018 by the Vision Sonora Committee as a key downtown enhancement project. City council members shortly thereafter moved forward to seek an environmental review and the idea continued to percolate. Back in March of this year, the council began mulling over the option of a one-year closure as a test.

Only “non-permanent” improvements are being allowed over the period as the area serves as a pedestrian corridor, such as benches and landscape pots. The city plans to review how things go before deciding whether to make the park a permanent fixture or reopen the street.