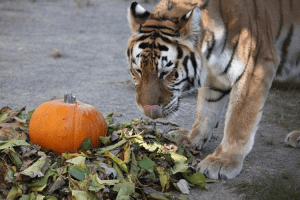 San Andreas, CA – A trio of tigers has found a new home in the Mother Lode.

Back in August, the California Department of Fish and Wildlife (CDFW) was notified by the Wildlife Waystation, a wild animal refuge that housed over 470 exotic and domestic animals in Sylmar, that their Board of Directors had voted to voluntarily relinquish the facility’s CDFW permit and cease operations.

CDFW officials described the 43-year-old refuge as an aging facility that received extensive damage from the 2017 Creek Fire and early 2019 flooding and the organization’s leadership was unable to repair the facility to meet current standards.

Upon receiving the notice, CDFW implemented an incident command structure, taking over daily and fiscal operations while assisting with finding new homes for the animal residents. New York-based nonprofit advocacy group Tigers in America (TIA) took on some of the placement tasks, helping relocate 42 big cats into new homes in eight sanctuaries across the country.

The newest PAWS residents, dubbed “The Waystation Three,” are reportedly settling in well, rapidly becoming accustomed to staff and the 14 other tigers that live on the property.

Considered elderly, Czar, a 17-year-old male, and Tessa, a 17-year-old female, are described as having significant but manageable disabilities that the PAWS staff is well used to handling.

Mungar, a 14-year-old male, has physical challenges that are thought to be the result of genetic defects from inbreeding. He is blind in one eye with limited vision in the other; he has malformed neck vertebrae that create neurological symptoms such as difficulty with using his rear legs; a deformity in his jaw makes chewing large food pieces difficult so staff cuts it into strips.

You can view images of the new residents by clicking into the image box slideshow.