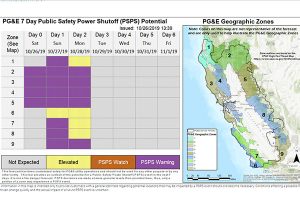 Update at 7 p.m.: PG&E reports another push back on the start time for its Public Safety Power Shutoff (PSPS) for the Mother Lode.

Tuolumne County emergency spokesperson Jason Terry shares that the utility says the weather is continuing to hold back. He relays, “It seems to have stalled out and given us a little bit more of a break. The time frame for the start of the de-energization is now anticipated to be closer to midnight tonight.

PG&E confirms it will be setting up three Community Resource Centers (CRC) in Tuolumne County at these locations: Eproson Park in Twain Harte, Mary Laveroni Park in Groveland, and the Motherlode Fairgrounds in Sonora. All locations will be open from 8 a.m. to 8 p.m. beginning Sunday, October 27 and subsequent days until the power is restored in the County, according to Terry.

Calaveras County will also open three centers beginning at 8 a.m. Sunday. The locations are listed below:

Further details on the end time of the wind even are below.

Update at 1:50 p.m.: A new shut off timeframe has been determined for the Mother Lode, according to local emergency officials.

Tuolumne County emergency spokesperson Jason Terry relays PG&E is telling them that the weather forecast has significantly changed for the area and in a better direction. While the utility is still trying to refine the timeline, Terry details, “The best projection right now is that the power will be out around 9 p.m.”

The end of the wind event has also moved. Terry advises, “They’re projecting sometime around midnight Sunday night, Monday morning. So, really what this boils down to is a shorter event on both sides. It gives us a little more time to prepare and a little bit less time to suffer without power.”

There are some changes to the Community Resource Centers that will be opened in Tuolumne County. In Twain Harte there is a new location at Eproson Park. Another center is being set up at Mary Laveroni Park in Groveland. Both will open Sunday, October 27 at 8 a.m. Terry shares that they are awaiting confirmation on any additional sites.

In Calaveras County, the center at the Meadowmont Shopping Center in Arnold will be opening but no further details on other sites are available at this time. Further details on the number of PG&E customers impacted are below.

Update at 11:46 a.m.: Pacific Gas and Electric Company (PG&E) confirmed it will implement a Public Safety Power Shutoff (PSPS) affecting approximately 940,000 customers—an increase of about 90,000 from previous estimates—in portions of 36 counties. That includes nearly 34,000 customers in Tuolumne County and over 30,000 in Calaveras. The two counties will also remain in the same cut off time of 5 p.m., but that could change depending on the weather. Further details on the PSPS can be found below.

Update at 11:30 a.m.: Tuolumne County emergency officials relay they have received confirmation from Cal OES that PG&E has formally decided to de-energize. The exact times will be confirmed at a 12:30 briefing. PG&E has confirmed that a community resource center will open at the Twain Harte Community Services District office. Also, a CRC site has been confirmed at Mary Laveroni Park in Groveland. Once again since it is anticipated for the shut off to occur later this afternoon, so the CRC’s will not open until Sunday at 8 a.m.PG&E is still working on finalizing one or two more sites in the county.

Update at 9:45 a.m.: While Mother Lode braces for this weekend possible PSPS, Clarke Broadcasting has learned the utility is watching another brewing wind event that could force an additional power shutoff next week in the region.

Here is the latest update from Tuolumne County emergency officials. PG&E should be sending out a formal decision to de-energize shortly. The anticipated start time of the PSPS has been moved up from 7 p.m. to 5 p.m. for both Tuolumne and Calaveras counties. That means the wind event will pass through faster than anticipated with PG&E pushing its end up to 8 a.m. on Monday.

Tuolumne County emergency spokesperson Jason Terry relays crews can begin inspecting lines and getting power back up at that time, but it does not mean power restoration will come sooner than the 48-hour time frame given by the utility, which also has concerns that additional damages outside of the PSPS areas by this wind event could be a drain on their resources.

Regarding another possible shutoff next week, Terry advises, “It’s too early to say whether there will be an actual power shutoff connected with this, but it is something we’re keeping an eye on. The impacts of that we could see as early as the 29th [Tuesday].”

PG&E has confirmed that a community resource center will open at the Twain Harte Community Services District office, located at 22912 Vantage Point Drive. PG&E is still working on finalizing one or two additional sites in the county. We will pass along more information on that and the PSPS as soon as further details come into the newsroom.

Original post at 7: 55 a.m.: Sonora, CA – PG&E has updated the status of the region making an outage more likely for the Mother Lode sometime tonight.

As the graph and map in the image box show, Tuolumne and Calaveras counties’ status has changed from elevated to a PSPS Watch. The company’s website describes the latter as “a reasonable chance of executing PSPS for public safety in a given geographic zone due to a combination of adverse weather and dry fuel conditions.” The utility notes an electrical shutdown is “typically only issued within 72 hours before the anticipated start of an event.” This is still not a confirmation that the power will be shut off. The graphic also details zone eight, which includes Tuolumne County, which will see a status drops back down to “elevated” status on Monday. Calaveras County is included in both zone five and eight meaning some areas status will remain as a watch while others closer to Tuolumne County will also decrease to an elevated status. Local emergency officials hope to get a final determination from PG&E sometime this morning.

Regarding the number of customers and communities within the 36 counties impacted by the possible power, shutoff includes over 34,000 customers in Tuolumne County and 30,396 in Calaveras. If the lights go out, local emergency officials detail that the utility has broken the counties involved in six different time periods with Tuolumne and Calaveras in period 4. That means the power cut off would be around 7 p.m. tonight.

There remains no update on the opening of Community Resource Centers (CRC’s) in Tuolumne County. PG&E is working to open 2-3 centers in the county, but the sites have not yet been confirmed. If the shutdown happens later tonight, the centers will not open until Sunday morning, beginning at 8 a.m. and running until 8 p.m.

Tuolumne Utilities District (TUD) and Calaveras County Water District (CCWD) are asking customers to use the tap sparingly during an outage. Also, CCWD is warning of possible overflows for residents using an electric septic tank pump without a generator.

Regarding restoration, PG&E hopes to have most power restored within 48 hours of the “all clear” being given. We’ll pass along more information as it becomes available.