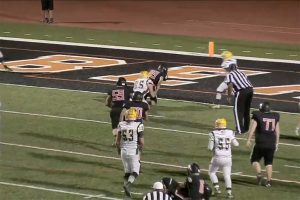 After a devastating loss to Calaveras last week, the Summerville Bears went head to head against the Argonaut Mustangs.

After losing Running Back Nick Veach a week ago, Josh Caldera carried on the duties of running back. A few good runs by Caldera along with a 45-yard reception by Running Back Titus Shirley took the bears down inside the red zone. Unfortunately, Quarterback, Jaden Brochini, fumbled the ball at the two-yard line to turn it over to the Mustangs.

The game was scoreless into the fourth quarter as the Mustangs had the ball. Kicking a field goal was the only good option for Argonaut but they missed, turning it over. Marching down the field with minutes left, Wide Receiver Chase Ryan caught a 30-yard pass. Then a bad snap on possibly the game-winning field goal led the game into overtime.

Both teams then had a chance to score, although one field goal missed for each team, and forced a second overtime. Argonaut started with the ball and ran it into the end zone for the first score of the game.

The bears then took over to try and tie it up. A catch by Tight End Ashton Bias brought the team inside the ten-yard line. A couple of short runs led to fourth down. Brochini took the snap, faked the handoff to Caldera, and threw a short pass up the middle to Bias but the refs called a fumble in the end zone with Argonaut recovering the pigskin.

The Bears ended up dropping to the Mustangs seven to zero in double overtime. Next week the Bears will face off against the dreaded Amador Buffalos.

Wildcats continue their winning ways in a big way by beating the Bret Harte Bullfrogs, 69-0.

The first offensive possession of Sonora’s ended in a 28-yard pass reception by Wide Receiver Gabe Milbourn and the extra point would sail wide, making the score 6-0 Sonora. Bret Harte would get the ball back, but on a passing play, Wildcat’s Jacob Neilson would pick the ball off and race 30 yards for 6 points and Hunter Foust would add the two-point conversion. The first quarter ended with Sonora up 14-0.

Sonora would open the scoring flood gates in the second quarter with 5 trips to the endzone. Wildcat’s Full Back Josh Fernandez from 42 yards out, Hunter Brewer would haul in Quarterback Nick Crockett’s 15-yard pass followed up by Milbourn hauling in his second scoring reception from 44 yards, Elijah MacDonald added another six points from 26 yards out and Crockett would round out the scoring in the first half. One extra point would fail after all those scores and the Cats took a 48-0 lead into halftime.

Wildcats would keep the Sonora scoring train rolling as Crockett would add another touchdown on a 63-yard scamper and Riley Paz would add another score from 18 yards out. Both extra points would take the score to 62-0 Sonora. In the fourth quarter with a running clock, Wide Receiver Shane Navarro would intercept a Bullfrog pass and take it 81 yards and with the extra point, the game would end 69-0.

Sonora remains at home next week for Homecoming against Calaveras who beat the undefeated Amador Buffaloes 17 to 10 last night. Bret Harte hits the road to take on Argonaut next Friday.