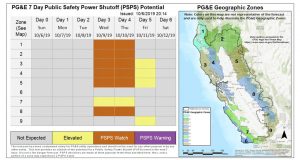 Updated meeting documents for the Calaveras County Board of Supervisors, which is meeting on Tuesday, state that it will be addressing its preparedness plans should PG&E enact a Public Safety Power Shutoff (PSPS) on Wednesday, as anticipated. The item is scheduled to come up at 1:30 p.m. Angels Camp City Council has called an emergency meeting at 6 p.m. to do the same.

Update at 4:22 pm: County officials in the Mother Lode are advising residents of an imminent potential outage due to potentially hazardous fire weather conditions.

Clarke Broadcasting talked with Tuolumne County OES Coordinator Liz Peterson on Monday afternoon. She reports that phone conferences are continuing to occur with the utility three times daily. At this point, she says that should the PSPS occur and involve the county, it could be among those areas powered down in the second phase, which could happen Wednesday afternoon. As far as notice goes, she thinks that local jurisdictions may have a couple of hours notice in the event of a pending shutdown.

Should that happen, Tuolumne County Schools Superintendent Cathy Parker points out that schools may be able to remain open Wednesday until the outage, which could occur while classes are in session.

While the conditions that would trigger a Public Safety Power Shutoff (PSPS) in the Mother Lode continue to evolve and there are many unknown variables, Peterson says OES must plan for the possibility that any entity or resident without a power generator could be without power for up to five days. She adds that Tuolumne County’s preparedness plan allows for continued generator-powered operations of critical service providers, including public safety agencies as well as local water and utility providers and that key staff will remain in place.

She points to refrigeration as a major issue for businesses and residents, noting that Environmental Health Director Rob Kostlivy has been doing outreach about spoilage concerns. As far as public precautions, she recommends that residents make sure to have enough medications on hand as well as spare food and water. Avoid all outdoor burning and other activities that could pose a fire danger. Ensure generators are installed and being used properly. Check on your neighbors, especially the elderly, frail, or those with access and functional needs.

As weather conditions are forecast to not be overly warm or cold, there are no plans for county-operated heating or cooling facilities although PG&E would in a PSPS event operate one resiliency center at a location still to be announced. That center would provide a tent, charging stations, water, and resources from 8 a.m. until 6 p.m. during a PSPS outage.

Update at 3:51pm:  According to Calaveras County Office of Emergency Services, PG&E advised them Sunday of a possible Public Safety Power Shutoff (PSPS) event that would affect portions of the county this week. Calaveras County OES officials report that they participated in a conference call with the utility this morning during which PG&E confirmed a PSPS is likely to affect the area sometime Wednesday morning.

Tuolumne County Schools Superintendent Cathy Parker shares with Clarke Broadcasting that the utility currently has 28 counties potentially on the alert for a PSPS, including Tuolumne and Calaveras. The latest word still is that a PSPS could occur around 4 a.m. Wednesday morning and last until noon on Thursday. However, since all the lines must be individually inspected before they are reenergized, the outage could last for several days beyond the actual shutdown. Since the county schools do not have sufficient infrastructure to support operations without power, she says in the event of a PSPS, the schools would close and remain so until power is restored.

Calaveras government officials note that theirs will include affected area maps and resiliency center locations. They add that they are preparing to minimize potential negative impacts of any PSPS events by continuing to provide critical services during the outages. However, residents may experience short interruptions in some non-essential services.

OES officials stress that as PG&E’s outages may occur in response to localized weather conditions, the PSPS timing may not be fully known until the day of the event. furthermore, the decision to turn off the power and the speed at which it is restored is planned and managed solely by the utility, so residents are strongly urged to prepare for being without power for several days.

Update at 10:10 am: Local Office of Emergency Services are providing insight into the possible planned power outages later this week.

Tuolumne County Office of Emergency Services Coordinator Liz Peterson states, “I was just notified by PG&E this morning that a severe wind event is expected to impact Tuolumne County (as well as 28 other counties) starting at 4 am on Wednesday and extending through 12pm (noon) on Thursday. De-energization is likely at some point during this wind event. All Tuolumne County residents may be affected for up to 5 days.”

PG&E is planning to notify customers this afternoon and is developing maps of areas that could be impacted. In addition, PG&E is looking at opening a community resource center during the outage.

Providing information specific to Calaveras County, Office of Emergency Services Coordinator John Osbourn adds, “This morning, Calaveras County OES participated in a conference call with PG&E, and confirmed that a PSPS is likely to affect Calaveras County sometime Wednesday morning. This situation is evolving, and further information will follow as it is developed. We expect to have an update by this evening that will include affected area maps, and resiliency center location(s).

Osbourn adds, “PG&E’s outages may occur in response to localized weather conditions and may not be fully known until the day of the event. The decision to turn off the power and the speed at which it is restored is planned and managed solely by PG&E. Citizens are strongly urged to prepare for being without power for several days.”

When dangerous fire weather is anticipated, there are three levels PG&E uses to note the threat level. It goes from “Elevated” to “PSPS Watch” to “PSPS Warning.”

Most all of the Sierra Nevada stretching from up near Lassen County down to Fresno County is under a PSPS Watch for this coming Wednesday and Thursday. It includes both Tuolumne and Calaveras counties. In addition, much of the northern California coast is under a watch.

The watch indicates that PG&E’s Emergency Operations Center is now activated based upon a reasonable chance of executing a shutoff due to a combination of adverse weather and dry fuel conditions.

If it reaches the next level, a warning, all customers are notified of the strong probability of power being shut off.

We reported earlier that the National Weather Service has issued a Fire Weather Watch for the Mother Lode and the Stanislaus National Forest for mid-week.