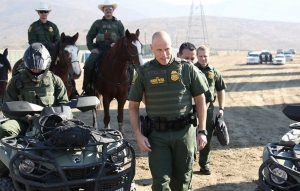 The House and Senate have both passed a resolution designed to block President Donald Trump’s emergency declaration at the southern border, and Republican Congressman Tom McClintock was one of the no votes.

The resolution is designed to prevent the President from diverting funds earmarked for military construction projects over to the border wall. The Pentagon last month released a plan to divert $3.6-billion to help its construction.

The resolution to block the national border emergency was approved 236-174 in the House and 54-41 in the Senate.

McClintock argues that Congress has delegated the President the authority to execute what he is doing, citing that national emergencies have been declared 58 times prior, including to address civil unrest in places like Sierra Leone and Burma. On the House floor, he stated, “Only when this President invoked his authority for the 59th time to address the most serious national security risk our country has faced in our lifetimes – the collapse of our southern border – do we hear protests from the left and its disciples in the House.”

He added, “Whether Congress should have delegated this authority is a separate question that no one has raised in 43 years.  But while that authority exists, the President has both a right and a duty to use it to defend our country.”

The votes in the House and Senate are expected to have little impact at the end of the day, as the President has the ability to veto the action.