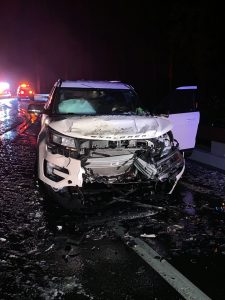 San Andreas, CA – An alleged DUI driver who collided with a deputy responding to a service call was jailed on a $130,000 bail.

According to Calaveras County Sheriff’s spokesperson Sgt. Greg Stark, the late Saturday night incident happened on Highway 4 near Big Trees.
Deputy Williams was headed to assist with a report of a missing hunter near Spicer Meadow Reservoir at the time.

Stark recounts that the driver of the other vehicle, 42-year-old John Ueda of Brentwood, was westbound on Highway 4 when he allowed his vehicle to cross into the deputy’s lane. Despite the deputy’s attempt to avoid Ueda ’s vehicle, the two crashed head-on, causing both vehicles’ airbags to deploy.

The deputy was transported to the hospital for treatment and has since been released.

The CHP, which investigated the incident, found Ueda to be under the influence and as he did not require medical treatment for injuries, placed him under arrest at the scene.

Ueda faces charges of DUI causing injury during an accident, having a blood-alcohol level greater than .08, and driving on a suspended license.
On a related note, Stark reports that the missing hunter was located about 3:30 a.m. about a mile from his last known point.