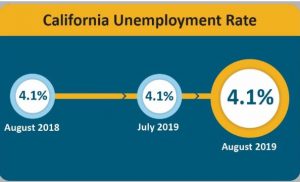 The Mother Lode saw a downward trend. Although Tuolumne County’s rate remains above the state’s record low, it dipped closer to that number, going from 4.6 percent last month to 4.3 percent in August. The current Tuolumne County workforce is 21,740 of which 920 are unemployed.

Calaveras County’s rate is actually lower than the state’s and matches the national figure of 3.7 percent for August, a drop from 3.9 percent in July. That leaves 810 without a job last month out of the county’s 21,800 workforce.

California’s period of job gains reached 114 months, passing the old record of 113 months set in July and exceeding the expansion of the 1960s. The EDD says the state has added an average of 29,200 jobs per month over that expansion timeframe since the Great Recession. Also, noting that it is broad-based with gains across multiple industries. The most jobs in August were added in government at 14,500 and the biggest loser was trade, transportation, and utilities with a loss of 4,000 jobs.