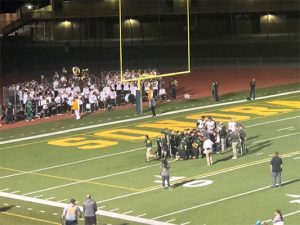 Wins all around for Mother Lode teams during week five of the high school football season.

Sonora gets their first win of the year in dominating fashion at home Friday night against Merrill West High School of Tracy.

On what felt like the first fall Friday, the Wildcats warmed up the scoreboard putting up 41 total points. Sonora opened the scoring in the first quarter when Quarterback Nick Crockett capped a drive with a 19-yard run and the Cats were up 7-0. West would quickly tie it up with a long pass and catch, ending the first quarter at seven apiece.

West would score one more time in the second quarter but it would come between a Sonora 41 yard (RB) Aidan Kostlivy run from his slot position and Elijah MacDonald scoring from 14 yards out to end the first half. The extra point would fail, but Sonora was up 20-14.

The Wildcat defense would shut out the Wolfpack for the remainder of the game, but not before Crockett took the first snap of the second half 71 yards. It was a combined effort of great blocking up front by the Cats offensive line and the quarterback’s determination not to go down. Sonora would add a two-point conversation and it was 28-14 Cats. Sonora’s (CB) Owen Bauer would get in on the action adding two more scores, the first, a two-yard plunge and the second from 21 yards out. The final try would fail to make the end score to 41-14, Sonora takes the win.

Next week the Wildcats are off with a bye before traveling to Argonaut on October 4th.

After coming off another devastating loss, the Summerville Bears earned their second victory of the season and it was on homecoming night! The bears faced off against the three-year football team from Delta Charter.  The Bears’ defense was quick to react on the second play of scrimmage. Delta’s secondary quarterback fumbled the ball and eventually rolled into the back of the end zone, resulting in a safety. That was just the first of many scores for Summerville. After receiving the punt, the Bears marched down the field and scored the first touchdown of the night for Summerville.

Play after play Summerville drove down the field. Although, a fumble and an interception kept the Bears from scoring yet again. (RB) Nick Veach carried the ball 16 times for a total of 113 yards, 56 of that yardage occurred in the third quarter. Connor Cowley had his first touchdown as a varsity member rushing 12 yards into the end zone on second and goal.

Eventually, the Dragons decided to spit some fire and rushed down the field to score a touchdown. In the end, Summerville won on homecoming for the first time in six years by beating the Delta Charter Dragons, 37-6. Next week Summerville will take a sabbatical so that they will be ready to start league games on October fourth against Calaveras.

A nail biter for Calaveras High School beat Bradshaw Christian, 21-19. The team is on its home field next week against Stellar Prep out of Hayward. A close game for the Bret Harte Bullfrogs but they walked away with a win against Arroyo High School of San Lorenzo, 13 to 7. Winning their first game since the resignation earlier this week of head coach Casey Kester. Next week they take on Linden at home.