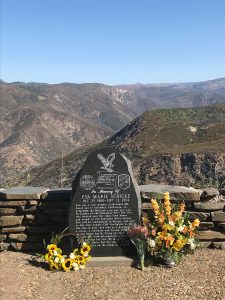 Sonora, CA — Mother Lode firefighters are marking the 15th anniversary of the day one of their own perished on duty.

On Thursday, CAL Fire Tuolumne Calaveras Unit officials shared that they acknowledged a moment of silence at 1:44 p.m. for Eva Marie Schicke. The 23-year-old Turlock native died September 12, 2004, when she and her crew from Copter 404 were engaged in the Tuolumne fire incident, a vegetation firefighting effort in the Stanislaus National Forest near Groveland.

Schicke was completing her fifth season with CDF (now abbreviated as CAL Fire) at the time of her death and was the first female firefighter from that agency to die in the line of duty. At the beginning of 2009, former 25th District Assemblyman Tom Berryhill authored Resolution 156 that designated a four-mile segment of Highway 120 from the Tuolumne-Mariposa County line to the Rim of the World Vista to be renamed the Eva Marie Schicke Memorial Highway. Flowers were laid at a marker there Thursday.

Official records note that Firefighter Schicke was a member of an elite nine-person helitack team that was called to fight the beginning stages of the fire. Upon arrival, seven members of the team were dropped off while two remained with the helicopter to begin water drops. The firefighters established safety zones and began their descent into a steep canyon. The fire was moving up the canyon away from them and had displayed mild behavior at that point. But while the crew was working, a wind shift blew the fire toward them.

CAL Fire TCU posted these words as the unit acknowledged her service: “Although today is the anniversary of this tragic event, let us always honor Eva’s memory. From her memorial marker, ‘Each day we can honor her by living our lives the way she did, with determination, kindness and a passion for life’.”