A Win And A Couple Of Losses 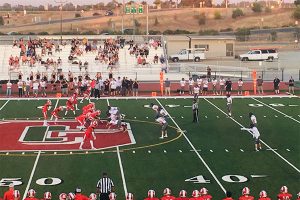 In high school football, it was week two for three local high school teams, while it was opening night for another.

After losing to Mariposa 24-30, the Summerville Bears earned a victory against the Galt Warriors. The Bears started off strong in the first half having Ian Henley kick an 18-yard field goal and Quarterback Jaden Brochini with a short run up the left side. Galt came back to take the lead in the third quarter but both Brochini and Running Back Titus Shirley came in with clutch plays to lead the Bears to a victory over the Warriors 24-21.

Next week the Summerville will travel to Ripon Christian hoping to go up 2-1 for the season.

The Wildcats dropped their first road game of the year 55-14 to the Ripon Indians. The scoring started in the first half with Ripon completing a 39-yard pass to take the early lead. Sonora’s Running Back Justin Morgan won a foot race to the end zone from 65 years out and with the extra point, it was tied 7-7. Ripon scored again after a long drive, and it was 14-7. The Cats Morgan would show his speed again, racing 95+ yards on the ensuing kick-off return to tie it up at 14.

Ripon would add two more scores in the second half, one in both the third and fourth quarters. Sonora’s offense put together some sustained drives, but turnovers happened, and the forces would stall.

Sonora is on the road again next week to take on the 2-0 Escalon Cougars, who were victorious over Calaveras last night 24-7.

Bret Harte High School had a bye-week and travels to Tracy to take on the Delta Charter.