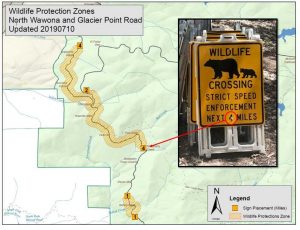 Officials say new signage is up as part of the park’s preparation plans in anticipation of a busy Labor Day Weekend. The posted signs designate several new Wildlife Protection Zones, which are located on roadway stretches throughout the park where in the past bears and other animals have been hit by vehicles. These zones will remain in effect until further notice.

Motorists will find that there are multiple zones across Yosemite Valley and along sections of Big Oak Flat, El Portal, Wawona and Tioga roads, all marked with signs advising them that speed limits in those areas will be strictly enforced. To view the signs and an area map of the zones, click into the image box.

As of Aug.28, 11 bears have been hit this year by vehicles; the park counts over 400 such incidents since 1995. Officials say that other species in similar danger from motorists include owls, Pacific fishers, butterflies, rare amphibians like red-legged frogs and salamanders; and mammals like deer, foxes, and mountain lions.

“One of the best ways to help protect wildlife in Yosemite National Park is to slow down and follow the posted speed limits within the park,” states Park Superintendent Michael Reynolds. He anticipates the new Wildlife Protection Zones will help reduce the number of animals injured or killed in the park by drivers.

In addition to obeying these signs and other posted speed limits, rangers say that motorists can do their part in protecting wildlife by also remaining alert behind the wheel, especially during dawn and dusk when animals are more active, and scan roadsides on both sides for wildlife as you drive.