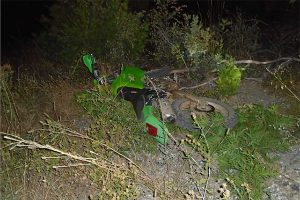 Motorcycle left behind by the suspect after chase

Update at 7:20 p.m.: Tuolumne County Sheriff’s officials have put out this description of the suspect involved in the motorcycle chase. He is approximately 6’3” tall, 250 pounds with long brown hair and a beard. He was wearing a black shirt and black/blue shorts.

Original post at 4:30 p.m.: Sonora, CA – A motorcycle chase on Highway 120 in Groveland ended with a suspect being tased twice, but still able to escape on foot.

The rider, wearing no helmet, speeding and passing over double yellow lines, flew by a Tuolumne County Sheriff’s Deputy just before 10 p.m. on Monday. When the deputy tried to pull the bike over near Mary Laveroni Park, the rider took off.

The brief pursuit lasted just 4.5 miles at high speeds with the suspect crashing his motorcycle into some brush on Alice Lane. Sheriff’s spokesperson Sgt. Andrea Benson tells Clarke Broadcasting, “The man jumped off the bike and began yelling threats of violence to the deputy and began charging at him. The deputy was forced to deploy his taser, but it had little to no effect.”

The suspect then took a fighting stance forcing the deputy to once again deploy his taser, according to Sgt. Benson, who continues, “The man pulled the taser probe from his chest and took off running into heavy brush.”  Nearby neighbors also tell us they heard what they believed to be a deputy shout, “On the ground’ several times and then a scuffle ensued.

Although the deputy chased after the suspect, he was able to get away. Sgt. Benson adds the identity of the rider is unknown and since the motorcycle had no license plate, it leaves no additional information for detectives to investigate. She asks that anyone with information on the bike, pictured in the image box, or information regarding the incident call the sheriff’s office at 209- 533-5855.