Grab A Pole, Fish for Free During Labor Day Weekend 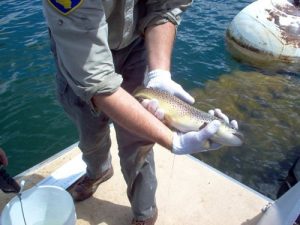 Sonora, CA – As the temps creep back down from the century mark this last official weekend of summer folks heading outdoors can also take advantage of the year’s last free fishing day.

California Department of Fish and Wildlife (CDFW) officials are reminding residents and visitors that Saturday, Aug. 31 is a freebie for all wannabe anglers and those without a current license. The opportunity to do this generally happens twice a year; once around the July Fourth holiday and again during Labor Day weekend.

As CDFW Director Charlton Bonham suggests, “Free Fishing Day is a great opportunity for experienced anglers to share their love of the sport with someone who’s never tried it.” There’s also plenty of appeal for those who love getting something for free with no strings just fishing lines attached.

Several helpful online tools are available to locate spots that have recently been planted with fish and details on numerous places where fishing is currently available, including the local amenities such as restrooms, barbecue grills, picnic tables, boat ramps, and fuel.

Officials emphasize that all fishing regulations, such as bag and size limits, gear restrictions, report card requirements, fishing hours and stream closures remain in effect on Free Fishing Day. They add that while avid fisherfolks might make good use of a basic annual resident sport fishing license, which costs $49.94 per year, one-day sport fishing licenses to cast your line some other time are also available for $16.20. Both can be obtained online.

According to the online CDFW Fishing Guide, there are several locations across the Mother Lode that were planted with sometime this year, including Pardee, New Melones, Cherry Valley, and Don Pedro reservoirs.

Over the past month, at least four fishing areas were reportedly planted. One is Angels Creeks, which is described as a channel overgrown by berries and willows with clear, swift water, mostly riffles, and some pools. Offering several comfort amenities at Murphys Park such as accessible restrooms, picnic tables, and barbecues, anglers here will be going for wild trout.

Hatchery trout were also planted in at least three spots, according to the Fishing Guide. They are detailed as follows…
Known and beloved for its many amenities, Pinecrest Lake near Strawberry offers a beautiful forested setting, easy access, a marina, bait and tackle, a store, propane, accessible restrooms, tables, and paved walkways.

White Pines Lake near Arnold, described as a shallow pond in a small park at old mill site is surrounded by oaks, willows, and evergreens. It has a gravel boat ramp and allows rafts and rowboats. Features include picnic tables, drinking fountains, a playground, fire pits, and a swimming area. Specifically prohibited are camping and gasoline outboard motors.

Located between Mi-Wuk Village and Long Barn off Highway 108, Lyons Reservoir is a narrow impoundment in the Stanislaus National Forest Stanislaus River Canyon that is open May to October with fishing access only. You will find the day-use area behind the locked gate. There is limited parking, a barrier-free toilet and drinking water available. Rules include no boats, no fires, and no swimming.