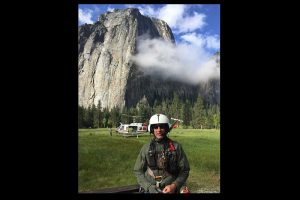 Yosemite, CA — Yosemite National Park reports one of their own has won the National Park Service’s prestigious Harry Yount Award for “excellence in the art of rangering.”

Jack Hoeflich is the 2018 recipient of the award named after the world’s first-known park ranger, Harry Yount, who patrolled Yellowstone National Park in the 1880s. The yearly award honors one park ranger in the nation “who consistently excels in duty performance related to serving park visitors while protecting the natural, historical and cultural resources of parks.

Ranger Hoeflich has many jobs including park medic, structural firefighter, wildland firefighter, technical rock rescue instructor, law enforcement officer, emergency services manager, supervisor, and helicopter and swift water rescue technician. He has also participated in some of the most time-critical and challenging rescues by the National Park Service, including ones on El Capitan and Half Dome, according to Yosemite officials.

“We are proud to honor and recognize Jack as the recipient of the 2018 Harry Yount Award. He is one of the most dedicated and skilled Rangers in the National Park Service,” stated Yosemite Superintendent Michael Reynolds. “In addition to being an exemplary Ranger, Jack also serves as a mentor to other Rangers throughout the Park.”

Ranger Hoeflich is also no stranger to park visitors who on any given day may find him directing traffic, bike patrolling Yosemite Valley, performing rescues or just giving directions. He received the award at a ceremony in Washington D.C. last week.