Ready For Some Football 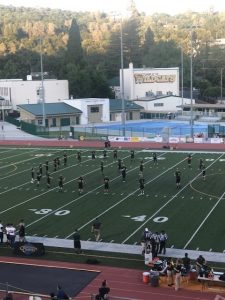 Wildcats on their home field against Oakdale

Sonora, CA – Most of the local teams hit the gridiron for the first game of the 2019 prep football season for area high schools last night. Here is how the teams faired.

Sonora dropped their opener to Oakdale 41-7. The final score did not show the effort put forth by the Sonora High Wildcats on the opening Friday of prep football.

In the first quarter, both teams showed a little case of the opening night jitters. Oakdale deferred after winning the kickoff and Sonora got the ball first. The Cats moved into Oakdale territory when a Mustang defensive back stepped under a Sonora receiver and snatched the ball away. Both defenses were stingy in the first quarter and there were zeros on the scoreboard for both teams.

Oakdale broke a 65-yard run for a touchdown and capped a second drive with a 9-yard touchdown plunge. With both extra points good, the score was 14-0 halfway through the second quarter. Then came the treacherous last four minutes of the second quarter where Oakdale was able to score 20 points, two quick touchdowns with points after.

The last points of the half came as Sonora lined up with time running out and as the ball was snapped, it popped out, bounced right into a Mustang player’s hands and went untouched for 43 yards and a score. The extra point went wide and it was 34-0, Wildcats down going into halftime.

Oakdale’s Leo Ayala, who along with Zeke Saffar had multiple touchdowns, scored 11 seconds into the third quarter from 71 yards out. The Wildcats were able to shut down the Mustangs for the rest of the game.

In the final quarter, with a running clock, Sonora’s offense put together sustained drives and marched down the field. On a couple of strong runs by Hunter Foust, Sonora got to the one-inch line, but a penalty pushed them back to the 6-yard line. A couple plays later, the Wildcats Aidan Kostlivy rushed from two yards out and with the extra point good, the score would remain as a final 41-7 with Oakdale on top. Ironically, that was the exact score of last year’s game.

In keeping in true Wildcat preseason opponents, Sonora will watch the film, make some adjustments and get ready to travel to the Central Valley next Friday to take on the Ripon Indians at 7 p.m.

Last night the Summerville Bears football season started with a defeat to the Mariposa Grizzlies 24 – 30. The Bears defense was the best part of the game. Although, multiple fumble recoveries, major sacks, and deflected passes were not enough to take down the grizzlies.

Bear’s Quarterback, Jaden Brochini, was awarded the Chicken Ranch Casino player of the game honors. Brochini passed for over 100 yards and rushed for 108 including a 76-yard touchdown run. Next week Summerville has an away game against Galt.

Bret Harte High School was on the road facing Orestimba and lost 48 to 7. They will get some extra practice time with a bye week next week then hit the gridiron again September 7th in Tracy facing Delta Charter. Calaveras High School will begin its season next week at home against Escalon.