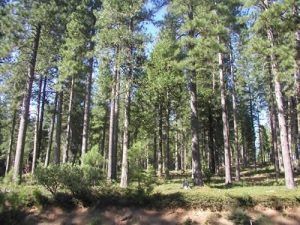 California’s largest timber company says it is planning to manage 60,000 acres of its forests in a way that boosts the amount of carbon dioxide that the trees absorb. The company will then sell the carbon "offset" to power companies that put off high emissions. The project will be done in partnership with environmental markets company Equator LLC’s Eco Products Fund.

"I think it is great news," says Mike Albrecht, President of the Tuolumne County Alliance For Resources and the Environment (TuCare). "They’re one of many timber companies around the United States that are trying to benefit from healthy forests that sequester carbon and give off oxygen. The goal of this is to maintain healthy forests and promote clean air."

"I think it will be good for forestry and small landowners," adds Albrecht. "If this catches on, I think smaller, private landowners can benefit from maintaining healthy forests and could probably get into the carbon offset exchange."

According to S.P.I. spokesperson Mark Pawlicki, approximately 20,000 acres will be set aside in Tuolumne County in the area of Cherry Lake. The company is making a commitment to use the land for carbon sequestering for a period of 100 years.

There are published media reports that S.P.I.’s initial offsets placed on the market will be worth around $10 million at current prices.