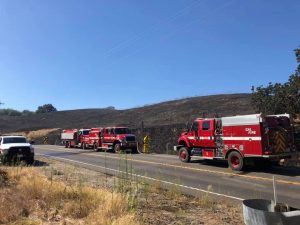 Update at 4:06pm: Columbia aircraft is back at base as firefighters continue working on the Rushing Fire.

CAL Fire spokesperson Emily Kilgore shares that several other resources were released and that as units work on achieving full containment the fire remains at about eight acres, located off Highway 132 near Rushing Road. The cause remains under investigation.

Update at 3:35pm: CAL Fire officials say forward progress on the Rushing Fire has been stopped.

CAL Fire TCU spokesperson Emily Kilgore says the fire, which broke out in grass just before 3 p.m. was about two acres and then grew to about eight acres before progress was arrested. No structures are under threat. She adds that Highway 132 is on one side of the fire and it is bumping up against an orchard on another side, leaving two sides to focus on containing.

Original Post at 3:06pm: Sonora, CA — If you hear planes overhead, Columbia aircraft are among units responding to a reported vegetation fire near Highway 132 and Rushing Road.

No further details are yet available regarding what is now being referred to as the Rushing incident. As you can tell from the map below the fire is located just north and east of Turlock Lake. We will provide more information as it comes to the news center.

Near Hwy 132 and Rushing Road