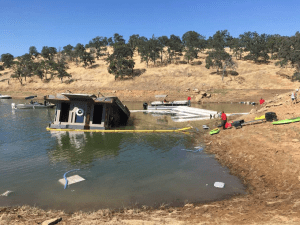 It was being utilized as a check-in spot for a poker run held in the area, and too many people were on the boat at once, causing it to take on water and capsize. The incident was reported to the sheriff’s office on Saturday afternoon, and officials report that thankfully everyone was able to get off the houseboat safely. However, a pontoon boat, tied to the houseboat, also capsized and sank.

Don Pedro Marina staff have placed barriers around the boat until it can be removed. The area is near the Blue Oaks Campground.