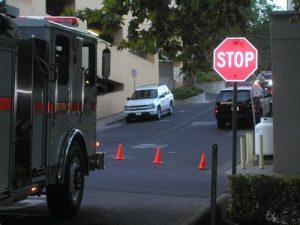 Sonora, CA — A Tuesday bomb scare in downtown Sonora turned out to be a false alarm.

The Calaveras County Bomb Squad was called in to detonate a suspicious looking duffle bag located under a stairwell at the Tuolumne County Superior Court at 60 N. Washington.

Sgt. A.J. Ford of the Tuolumne County Sheriff’s Office says after the bag was destroyed, it was discovered that it contained someone’s personal items and clothing.

A number of side roads were closed down during the investigation, including portions of Yaney Ave., Green St. and Dodge St.

Also assisting with the effort were Tuolumne County Ambulance, Sonora PD and Sonora Fire. The bag was discovered at around 4:30pm.