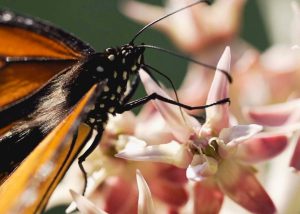 Monarchs are showing up at the park amid concerning reports of declining numbers in other spots along their migratory routes. According to Yosemite National Park spokesperson Jamie Richards, “We see monarchs a few different times of the year, and this is a normal time to see migrations. We see many of the monarchs especially around the milkweed where they lay their eggs…a necessary habitat, which for them goes hand in hand with their migratory activities.”

She adds that extensive restoration activities in Cook’s and Ahwahnee meadows, where many of the monarch sightings are occurring, are conducted with support from Yosemite Conservancy and include milkweed and other habitat protection.

Experts note that the orange and black colors of the monarchs constantly provide potential predatorial birds with the reminder that they are not good to eat. In fact, it is the monarchs’ milkweed diet that makes them so toxic birds that try to dine on them will vomit colored wing bits onto their feathers. There are two populations of monarch butterflies in the U.S. The group living east of the Rocky Mountains has a much longer migratory route over the mountains and then south to winter in Mexico. Those that live west of the Rockies, such as those in Yosemite, migrate to the coast of central and southern California.

Increasing construction and use of field herbicides are blamed for disappearing populations of milkweed and other essential native plants along the migration routes, which are linked to vast declines in monarch numbers, including up to 99.4 percent of the 1980 population count.

Meadow restoration projects at Yosemite include building habitats for the monarch, eliminating invasive plants and offering planting projects that visitors can participate in. Through the end of August, anyone interested in volunteering can meet up to help on Fridays at 9:30 a.m. in front of the Yosemite Valley Visitor Center.

For all other park visitors, Richards says there are also ways to help protect Yosemite’s monarchs and the plants that support them. “Please stay off meadow resources, use designated paths and boardwalks to walk around meadows — and give plants a chance by not walking on or picking them,” she directs.

Drivers should also decrease their vehicle speed when driving in areas with a lot of butterflies and moths to give them a chance to fly above. She says simply, “Help us by slowing down — and brake for butterflies!”