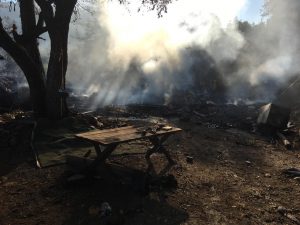 Columbia, CA — The Tuolumne County Sheriff’s Office reports that a body was found near the home in the Big Hill area that was destroyed by fire this morning.

We reported earlier that the home on Calle Quartz Road near Adelleana Lane as fully engulfed in flames when the first responders arrived during the six o’clock hour.

Sgt. Andrea Benson reports, “The cause of the fire and death remain under investigation. An autopsy to determine cause of death and identification of the victim will be conducted.”

The fire also burned 1/4 acre of nearby vegetation and forced the evacuation of some neighboring homes. The destroyed residence was situated behind the Hatler Mill.