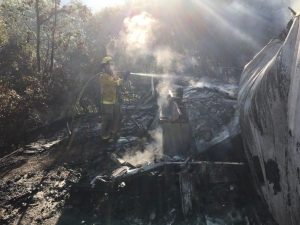 Update at 7:40am: Firefighters are continuing to extinguish a house fire along Calle Quartz Road near Adelleana Lane in the Big Hill area. CAL Fire reports that the 1/4 acre vegetation fire near the home has now been contained. The cause of the fire is not immediately known. Crews will remain on scene throughout the morning.

Update at 6:55am: CAL Fire reports that the home on Calle Quartz Road is fully engulfed in flames and officials are working to extinguish it. The fire has also burned about 1/4 acre of nearby vegetation. No injuries have been reported. Activity continues in the area. Some of the adjacent homes have been evacuated.

Original story posted at 6:15am: Columbia, CA — There is a residential structure fire reported near the end of Calle Quartz Road in the Big Hill area.

It is near the intersection of Adelleana Lane. A heavy amount of firefighters are responding to the scene. Be prepared for activity in the area. Officials report that the house is behind the Hatler Mill. Officials are evacuating some of the nearby homes.