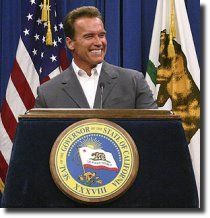 Governor Arnold Schwarzenegger Tuesday visited the Oak Glen Fire III in San Bernardino County to receive a briefing on the status of firefighting efforts statewide. The Governor also proclaimed a state of emergency in San Bernardino County due to fires that have burned hundreds of acres, forced an entire town to be evacuated, are threatening homes and commercial structures and have sent people to emergency shelters.

The Governor’s Briefing was Wednesday’s KVML “Newsmaker of the Day”.

The full text of the proclamation is below:

WHEREAS on August 30, 2009, two wildfires began in San Bernardino County and they continue to burn; and

WHEREAS these fires have already burned hundreds of acres, forced an entire town to be evacuated, are threatening homes and commercial structures, and have sent people to emergency shelters; and

WHEREAS I requested and the Federal Emergency Management Agency approved a Fire Management Assistance Grant to defray some of the emergency response costs; and

WHEREAS the circumstances of these fires, by reason of their magnitude, are or are likely to be beyond the control of the services, personnel, equipment and facilities of any single county, city and county, or city and require the combined forces of a mutual aid region or regions to combat; and

WHEREAS under the provisions of section 8558(b) of the California Government Code, I find that conditions of extreme peril to the safety of persons and property exist due to the fires in San Bernardino County.

NOW, THEREFORE, I, ARNOLD SCHWARZENEGGER, Governor of the State of California, in accordance with the authority vested in me by the state Constitution and statutes, including the California Emergency Services Act, and in particular, section 8625 of the California Government Code, HEREBY PROCLAIM A STATE OF EMERGENCY to exist within San Bernardino County.

IT IS HEREBY ORDERED that all agencies of the state government utilize and employ state personnel, equipment and facilities for the performance of any and all activities consistent with the direction of the California Emergency Management Agency (CalEMA) and the State Emergency Plan, and that CalEMA provide local government assistance under the authority of the California Disaster Assistance Act.

IN WITNESS WHEREOF I have hereunto set my hand and caused the Great Seal of the State of California to be affixed this 1st day of September 2009.